Anyone who has ever spent a moment on Whispering Randomness can’t have possibly avoided noting “A little intriguing wordsmithery” in the right column of each and every page.

Those aren’t randoms from a popular ‘quote of the day’ email or keyword search site like BrainyQuote, GoodReads, Eduro, The Quotations Page or The Quote Factory. Every single one of the quotes shown have had an impact on me personally. For several years, I have made it a point to save them. This just so happens to be the place I wound up translocating all 200+ quotes from my various lists.

Back to the topic of Einstein quotes. We’ve all heard something on the internet and think to ourselves ‘seriously?’. On occasion, I do take a little time to verify the source of quotations, especially when they’re someone noteworthy or of high intelligence, like Einstein.

Over time, I’ve encountered quite a few quotes that weren’t actually from the source provided. Case in point, just this morning I was about to post a note on my social media networks referring to a quote I think about often:

What one thing can you start counting today that will actually be meaningful in your life?- Chip Conley, Ted Talk: Measuring what makes life worthwhile', Feb. 2010

Ongoing change in my life has had me counting things I do, see and have. I was looking for an additional point to refer to  – rather than just blurting out the quote. I found this one:

A simple search to validate this yielded a curiosity. QuoteInvestigator.com, ferreted out so much history on related statements that I have to believe their analysis. There are several potential sources, but the quote can most likely be attributed to William Bruce Cameron, author, humor columnist and fellow American Mensan. 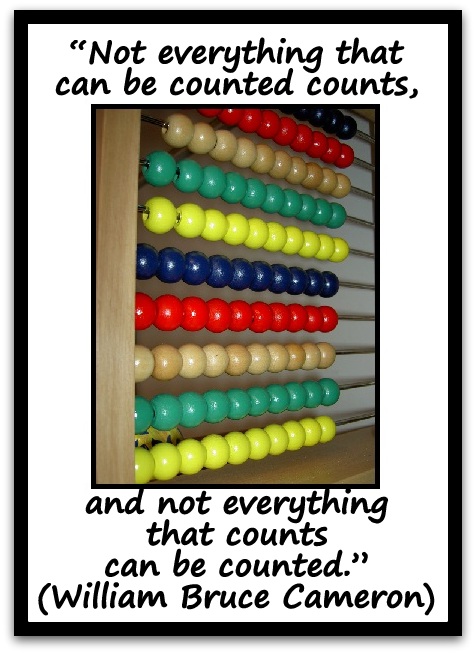 In hindsight, I decided to check a few other quotes I have shared here, some of which I’ve been led by the internet to believe were Einstein’s.

After further validation, I’ll eventually update the author of those deemed questionable. As of now, I know for a fact not all of these are attributable to Einstein.

Which do you think he didn’t say?

One of My Favorites

Breeze Through the Archives

Iconic One Theme | Powered by Wordpress